This is an archive of my research into Holobionts, biological individuality and units of life.

My interest in biological individuality grew out research into scientific epistemologies and some issues I was having with my vagina. People probably already think of their vaginas as containing or being an ecosystem (?), and about four years ago I started seriously engaging with the idea. In this view the vagina contains all kinds of necessary creatures which, in the right balance with one another, produce health for the system - overall comfort for me. But the idea that I am just a ‘host’ to something that is essential to being free from pain (aka ‘healthy) felt weird to me. What am ‘I’ without those bacteria? Why aren’t they considered me? Or why am ‘I’ not considered multiple if I need them and they need me?

In 2017 these lightly sketched inquires gained dimension when I encountered a powerpoint by a biologist and evolutionary scientist who specialises in turtle shell formation led, Scott Gilbert. 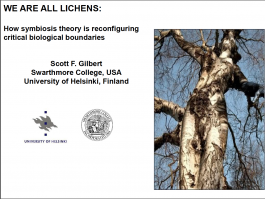 This archive is for questions and for trying out different ways of giving form to questions.

I do not understand more than the basics of molecular biology, so I’m not able to contest or critique theories on their scientific grounds but I am able to review how consensus builds, the context for why ideas take hold, and reflect on my own impetus to look to western science as the most legitimate grounding for my politics and colonial or “modern” epistemologies. This is also where I try to think about the border of biological individuality (as its been figured so far in western science), skin. Skin - a real boundary and also maybe less fixed than people act like?